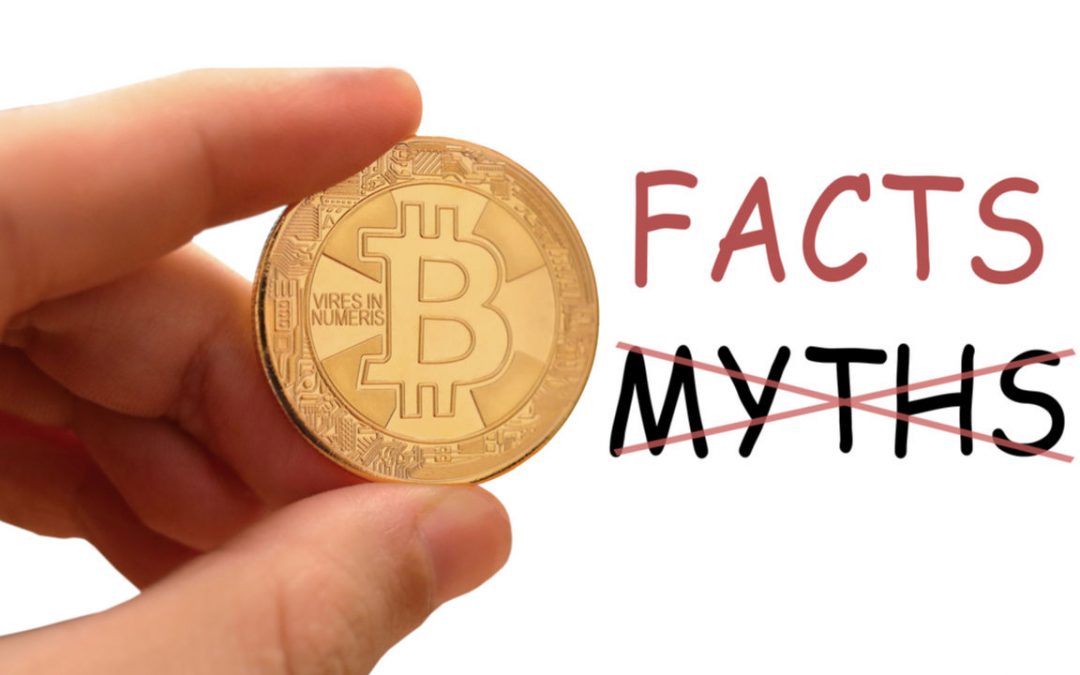 Despite having the best year of its short life as an investment, cryptocurrency myths continue to plague the industry. 2017 was a transformative year for the cryptocurrency. Its combined market cap grew to more than $600 billion by year’s end, up from just $15 billion in January 2017.

While the soaring prices that came with this growth might have acted as a barrier to entry for some investors, the market has since faced an interesting turn of events.

The 2018 cryptocurrency market has thus far been defined by a significant drop in prices; a correction from the skyrocketing ascent that crypto took last year. This turnaround is now presenting new investors with an intriguing opportunity to enter the market.

However, some remain hesitant to dip their feet in the pool because of cryptocurrency myths, misperceptions, or falsehoods they hear from friends, family, and even members of the media.

Such misinformation is nothing new for any new technological revolution, global movement, or asset class, so it’s not surprising that cryptocurrency is facing the same, uphill battle for broader acceptance.

From doomsday predictions to Ponzi schemes to security struggles, crypto has endured the storm and emerged as a new way of doing business and trading currency that has captured the imagination of millions of Americans.

This article will tackle not only the misconceptions of how one enters the crypto market, but also clear up confusion on purchasing digital currency for use in retirement accounts; a practice that has gained considerable momentum for those with a long-term view. Here are the four biggest cryptocurrency myths when it comes to investing.

It’s too late to enter the market.

As crypto prices experienced meteoric rises in 2017, many expressed disappointment that they had ‘missed their chance’ to be part of the revolution. It’s short-sightedness like this that has acted as the barrier to entry for many new forms of technology throughout history. The reality is that crypto’s value and influence will only grow as the technology is refined and becomes more and more a part of day-to-day financial transactions.

In fact, a recent internal memo from JP Morgan said as much, asserting that cryptocurrencies and blockchain will continue to grow and evolve. For those who believe the crypto market includes Bitcoin and a bunch of pretenders, consider this: Bitcoin’s rise in price was only the 8th-largest concerning percentage change for the 2017 calendar year. Ripple and NEM led the charge overall.

The blockchain is leading the drive forward, already being used in the healthcare industry to store medical records, dramatically reducing the chances that they can be stolen. Other industries on the cutting edge of the blockchain movement include those specializing in supply chains, digital ID creation, and data sharing, and the transfer of automobile and land titles.

You have to be tech-savvy to understand cryptocurrency.

It’s critical to understand anything you’re considering investing in thoroughly. But when it comes to cryptocurrency, that doesn’t mean that you need a formal cryptography education or a comprehensive knowledge of how blockchain technology works. Think about it: If you invest in Google, do you need to understand how the search engine’s algorithm works?

Do you need to understand the process of drilling for oil through hydraulic fracturing to put some money into Exxon? Research any coin you’re considering investing in will arm yourself with the knowledge to make smart decisions. If you’re new to investing in general, consider contacting an expert in cryptocurrency trading to get a sense of basic strategies and how they relate to this market.

The cryptocurrency market is just a house of cards.

Remember that report from JP Morgan singing the praises of cryptocurrency and blockchain? Eighteen months ago, JPMorgan CEO Jamie Dimon was leading the charge when it came to cryptocurrency myths, calling Bitcoin a ‘fraud” and claimed he would fire any trader that began trading in it.

Vanguard senior economist Joe Davis has gone so far as to claim that cryptocurrencies are not currencies and that there is “a decent probability that its prices go to zero.” Just like in every industry centered around financials, cryptocurrency has its share of bad apples and scams, such as BitConnect.

A multilevel marketing scheme, Bitconnect reached a price of $463 in December 2017 and had tumbled to $5.92 by the end of January 2018. But even the most virulent of doubters can deny the real-world cryptocurrency applications that have already come online. Blockchain technology is already being used by healthcare facilities to store patient records and record disease outbreak information. And there are currently 3,433 bitcoin ATMs spread across the globe, including 274 in New York City.

In time, the useless digital assets will be weeded out, and the true innovators will rise to the top to drive the market. Some of the most straightforward advice in the world is also the best: If it sounds too good to be true, it probably is. When you smell a scam when considering investing in a coin, follow your instincts and move on.

Cryptocurrency is full of security threats.

While there are plenty of reported incidents of hacks and stolen cryptocurrency, an overwhelming part of those crimes revolves around a lack of knowledge on the individual investor’s part of how to keep their assets safe.

It can be a bit of a learning curve to understand just how we possess cryptocurrency. When you purchase stock, you receive the actual certificates which hold real value. There’s no equivalent to that in cryptocurrency, but that doesn’t mean it doesn’t exist and can’t be stolen.

Every cryptocurrency owner has a private key that provides access to their digital wallet. When crypto owners allow that key to be exposed to third parties, they risk being robbed.

The reality is that, with just a little self-education, it is not difficult for investors of any level of expertise to protect their assets. For example, cryptocurrency users can opt to take their assets offline and put them in cold storage – often on a device like a flash drive.

Unless someone physically breaks into your house and steals the flash drive, your cryptocurrency is safe from harm. A few firms have taken the extra step of offering insurance on cold storage assets for loss or theft.