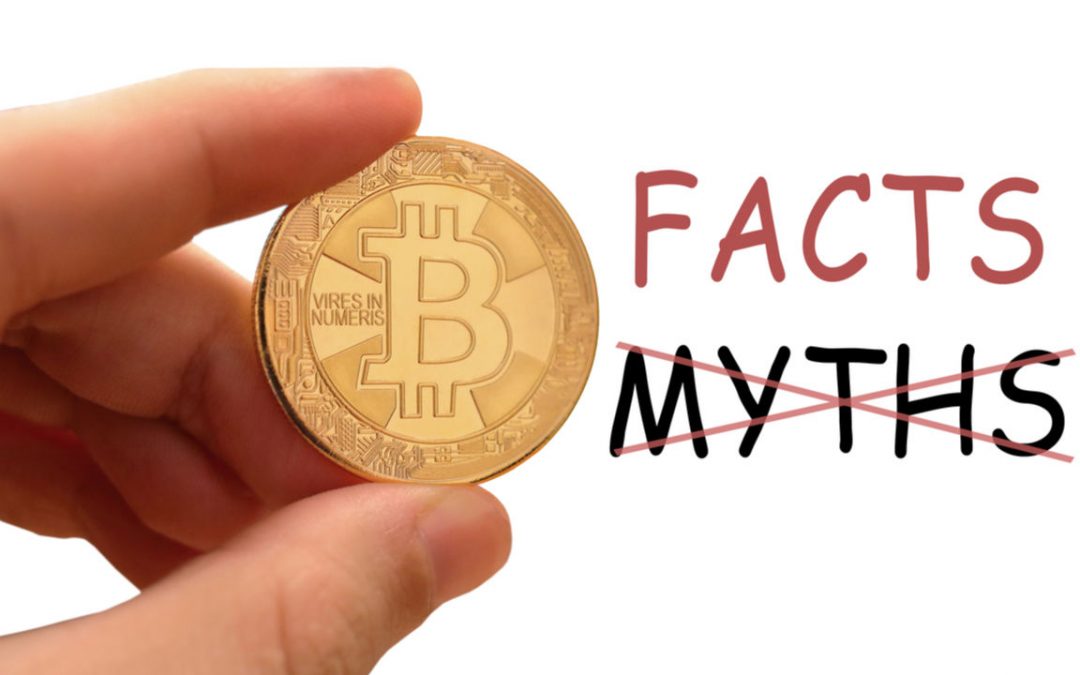 Cryptocurrencies have become a topic to cause polarized views. Since they had increased coverage in the media, people have divided into one of two groups: cryptocurrency naysayers or enthusiasts.

Of course, through this, there is a lot of misinformation regarding crypto and blockchain being spread throughout the internet. With this list, we’re going to detail some popular myths and clear them up so you can be more informed.

The blockchain is considered a “public ledger.” This descriptor is largely ignored, it seems, as it is widely believed that all activity on the blockchain is anonymous. On the contrary, transactions are entirely traceable.

There are ways around this of course, and some currencies like ZCash and Monero base their entire goal around privacy. However, because investors go through exchanges like Coinbase or Kraken, they are giving out their information. Most of the time, you can’t go through a single exchange without providing identification, proof of residency, and even banking information. In fact, governments work closely with some exchanges to monitor blockchain transactions.

2. Cryptocurrencies Are Ideal For Illegal Activity

Due to its connections to the dark web, the general public believes that cryptocurrencies are purely used for illegal activities on the internet, like buying drugs or sex trafficking. As mentioned previously, the blockchain is public, and transactions can be traced indefinitely.

Privacy tokens like Monero make it much easier for these illegal activities to be done, but more commonly used coins are traceable from their very first use. Criminals have been using cash for decades.

3. Cryptocurrencies Are In A Stagnated Bubble

Cryptocurrency has only been around for a decade. In that decade, it has been public knowledge for less than a year.

In their current state, cryptos don’t have much of a safe platform to be utilized. Fear-mongering, fake projects, and a general lack of knowledge are preventing cryptocurrencies from realizing their full potential.

It’s important to do your research and if you invest, do so into cryptocurrencies with a well-presented idea, a solid foundation, and a reputable team behind it. As those projects come to life and have the proper time to present themselves, the nay-sayers may come around.

It is believed that Bitcoin and other cryptocurrencies are unsafe. Yes, there are a ton of scams and fake projects out there just looking to take your money.

That said, these are easily avoided with a little bit of research and mindfulness. The vast majority of popular cryptocurrencies are real projects with a goal. Bitcoin, Monero, Ethereum, and DASH all have viable use cases and are attempting to innovate on specific industries.

Also, it’s important to be safe with your cryptocurrencies. Some users leave their assets on exchanges, and they are just asking for something to get hacked. Cryptocurrencies are best stored offline in a paper or hardware wallet. If you don’t have access to those, at least a desktop wallet does wonders for security.

The great part about cryptocurrencies is that you don’t have to hand your private key out to anyone. Your cryptocurrency assets are never exposed to the rest of the world. Only your wallet address is necessary to make purchases and transfer coins.

On top of this, cryptocurrencies aren’t controlled by any one party. This ensures their security, so no governments or ill-meaning groups can take down the network or anything of the sort. If users take the right steps, digital assets are the most secure way to store value.

5. Bitcoin and Other Cryptos Help Avoid The IRS

This is entirely false. Most exchanges, the places where users buy cryptocurrencies, now require users to fill out a good amount of identity verification criteria. Their asset purchases are then accounted for.

The SEC has now claimed cryptocurrencies as securities and taxes must be paid on purchases. Earning coins via mining or other ways is now classified as taxable income.

On the bright side, this government acceptance means that cryptocurrencies are more likely to be taken seriously by the mainstream.

6. The Government Has Little To Do With Cryptocurrency

Another false claim. If people in public were starting to find it back in 2008, there is no question that the government was getting involved alongside them. While they are a little late concerning regulation, the United States and other governments have definitely been keeping an eye on things.

In fact, it is known among cryptocurrency enthusiasts that the United States government trades highest amounts of Bitcoin in the world. They also manage one of the largest wallets in existence – one with nearly $120 million in Bitcoin.

Part of this is due to the Silk Road takedown back in 2013, in which the U.S. government claimed around 144,000 Bitcoins. Just because they’re keeping it a secret, that doesn’t mean the government doesn’t get involved with digital assets.

To add to some previous debunking, cryptocurrencies are not a new idea. The general public seems to think that Bitcoin just sprang up out of nowhere and that it’s just a fad.

As previously mentioned, Bitcoin has been around since 2008 and has only grown in its decade of existence. There are a ton of systems behind Bitcoin that have had time to evolve and will continue to do so.

The blockchain is currently being utilized for all sorts of exciting projects as well. Even if a majority of them fall through, there will be more, and it only takes one uber-successful idea to get more people to believe in the blockchain.