Why Bitcoin Is The Best Performing Currency of 2015 and 2016

Bitcoin has had a wild ride over the past few years, and 2016 is no exception!

As Bloomberg wrote, “Bitcoin’s Rally Crushed Every Other Currency In 2016.” Why did that happen? Well, let’s start by taking a looking at what’s happened to Bitcoin’s price over the past few years…

PHASE 1 – In November 2013, I wrote my first article that was actually bearish on Bitcoin. It was a “warning” that I thought bitcoin was due for a major correction, and that I wasn’t interested in buying at the current price around $900.

PHASE 2 – During 2014, fear set in for many people that bought at the highest prices, and we saw a year-long bear trend. This was a year of active trading for me, where I had some great short trades (betting on price to go down), and even a few big bounce trades.

Most people didn’t even know you could short bitcoin, so there was a huge edge to being a dynamic trader who could make money no matter if price went up or down.

PHASE 3 – In January 2015 I sent a trade alert for a buy at $188. Needless to say, the media and much of the public was VERY bearish (negative) on bitcoin at that point.

But as Warren Buffett says, “When people are scared, be greedy.”

Throughout 2015, Bitcoin’s price stabilized around $200 and held up for most of the year. During that time we saw a significant amount of new startup investment capital.

PHASE 4 – Even though the Bitcoin community took some heavy hits in 2016 (hacks, internal fights about development, and regulatory pressure), the price marched on higher throughout the entire year.

We saw an incredible breakout in the summer of 2016, and a late December bull run to give Bitcoin a new all-time high in market capitalization.

To date, Bitcoin startups have raised over $1.3 Billion dollars. The amount of innovation and development around the new cryptocurrency economy is one of the most exciting spaces from Silicon Valley to Wall Street.

In the chart below, you can see how bitcoin startup funding started to gain momentum in mid 2015. 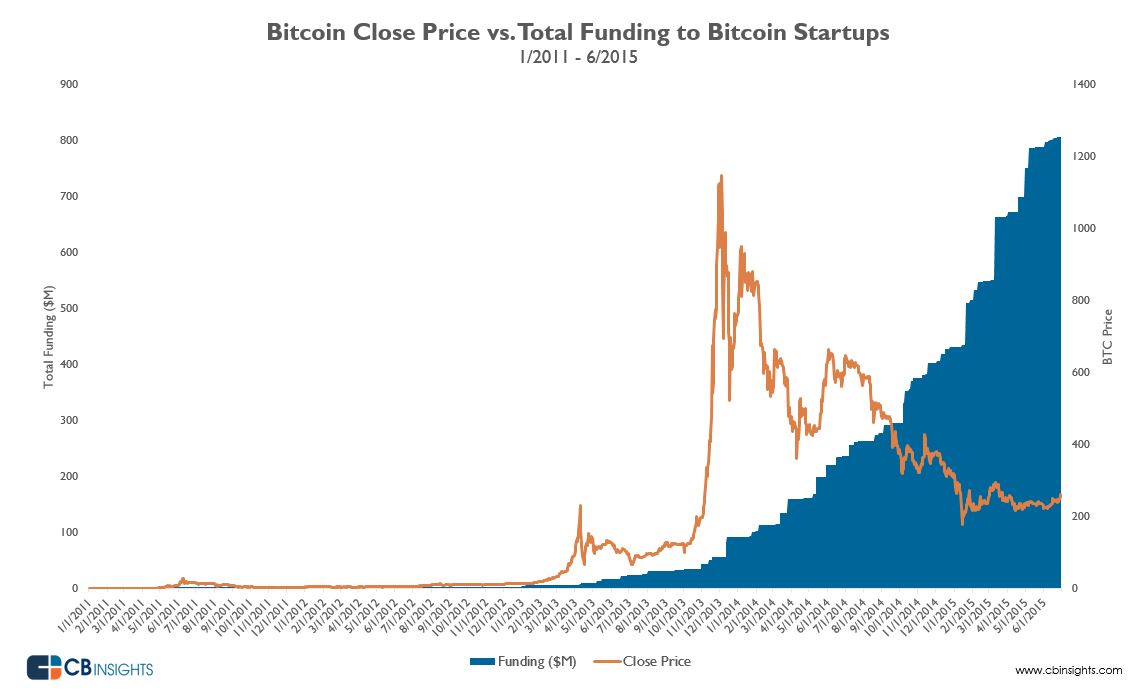 Instead of being overly obsessed with Bitcoin’s price, I like to focus more on the innovation, development, and user adoption around Bitcoin.

There are some incredibly smart and successful entrepreneurs and investors that have been investing in Bitcoin startups over the past few years.

As you can see in this Venture Capital list from CoinDesk, Bitcoin startups have raised $1.342B as of 12/24/16. One of the most prominent VC firms, Andreessen Horowitz, has invested in at least 8 startups.

Most people in first world countries haven’t been paying much attention to Bitcoin, because quite frankly, they haven’t NEEDED it… yet.

Also, people are flocking to Bitcoin because of currency controls, hyperinflation, bail-ins, and many more issues…

For example, India just made about 85% of its paper currency illegal. They’ve required people to bring in the most used fiat currency bills to exchange them for new ones. The problem is if someone brings in too much “undocumented cash”, they’ll tax and potentially fine the person.

Also, India has set a limit on the amount of gold a family is legally allowed to own. Gold has been a store of value for Indians for centuries, which is typically passed down through generations. Now the Indian government is searching, raiding, and confiscating gold from families!